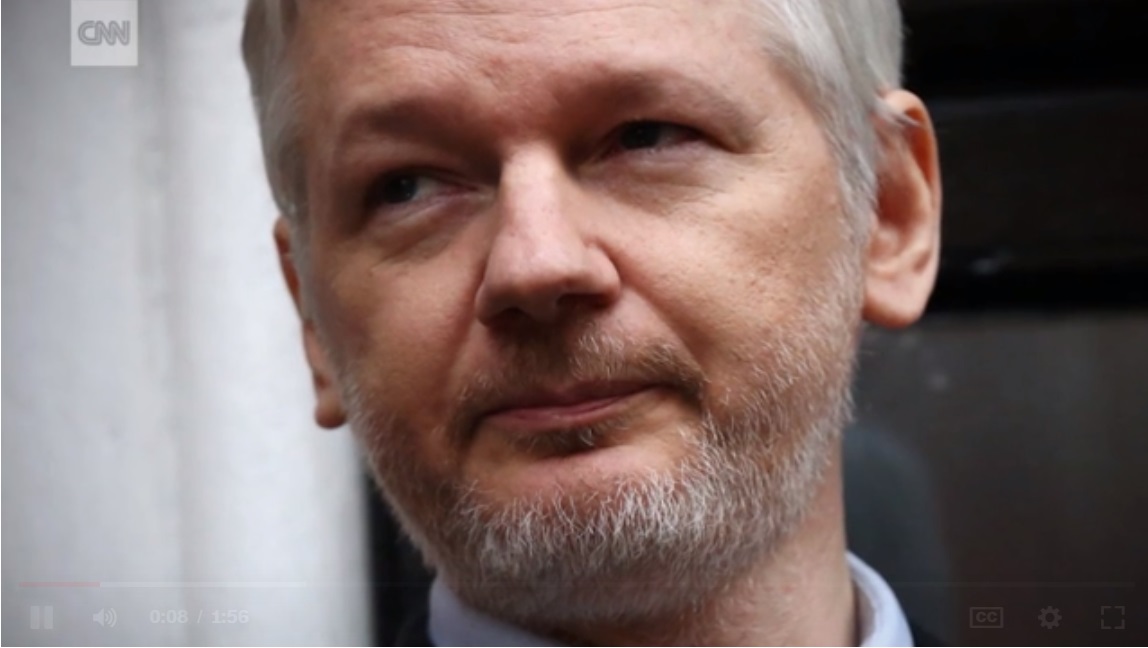 (CNN)WikiLeaks co-founder Julian Assange has directed his legal team to launch proceedings against the government of Ecuador for "violating his fundamental rights."

In a statement, WikiLeaks said Friday Ecuador had "threatened to remove his protection and summarily cut off his access to the outside world."
It added that the embassy has refused journalists and human rights organizations to see him as well as installed signal jammers to prevent phone calls and internet access.
The whistleblower has been holed up at the Ecuadorian Embassy in London since 2012 when he was granted asylum as part of a bid to avoid extradition to Sweden where he was facing allegations of sexual assault. The case has since been dropped but as Assange fears US extradition due to his work with Wikileaks, he has remained in place.
The accusations against Ecuador come after a document was leaked earlier this week revealinga new set of house rules Assange must adhere to in London from December 1.
The memo, which was written in Spanish and first published by Ecuadorean website Codigo Vidrio, specifies that Assange must pay for his own expenses like food, medical and laundry, that visitors must have prior authorization, and that he must not only keep the spaces inside the embassy clean, but also take care of his cat. It also reiterates the position that he is not allowed to interfere in any other country's political matters.
The leaked document says that the 47-year-old is at risk of losing both his pet and his asylum status if he does not comply.
WikiLeaks lawyer Baltasar Garzon arrived in Ecuador this week to launch legal proceedings.
In a news conference Friday, Garzon said there "a number of measures which have a threatening tone" and accused the Ecuadorian government of "not doing enough."
He added: "This is the time when they need to act ... it's on Ecuador's interest and also Mr. Assange's interest."
Assange has seen a copy of the new directives for residing at the London embassy -- which are not on official embassy paper or signed by anyone -- but has yet to receive official acknowledgment that this is what he must follow from December 1, his legal team said.
A member of Assange's legal team, Carlos Poveda told CNN earlier this week that the rules were a "unilateral imposition from Ecuador in order to weaken the asylum granted to Assange (by) establishing conditions that are stronger than a jail."
CNN contacted the Ecuadorean Foreign Affairs Ministry for comment on the leaked memo but has yet to receive a response.
But on Wednesday, the Ecuadorean Foreign Affairs Ministry confirmed the document after it was forced to deny media reports of pressure to issue new rules for Assange's living arrangements.
"Ecuador is a sovereign state, that makes its decisions on foreign policy with autonomy and looking after the national interests while strictly following international law," it said.
Assange's lawyers argue that Ecuador is breaching his rights by continuing to deny him access to the internet; the whistleblower was pulled offline back in March for failing to follow rules that Ecuador said he agreed to as part of his asylum.
"Ecuador's government warns that Assange's behavior through his social media messages puts in risk the good relationship the country has with the UK, other EU countries and other nations," a statement from March said.
The statement did not specify which message or messages, if any, violated the agreement.

CNN's Ana-Maria Canizares and Bianca Britton contributed to this report.

wants him gone. Its now only a matter of time before he is evicted, in jail and or on his way to the USA

or perhaps Australia to stand trial on terror related charges.

This creep ripped off his condoms during sex, without consent.

While this is not a crime in many countries including Canada it should be.

engage in human trafficking, the enslavement of men.

The worst abusers are the female judges of the Ottawa Courts, who abuse their power by making

feminist decisions to incarcerate , terrorize and enslave any male who seeks custody of a child.

Their names are well known. At any time one will be considering retirement when exposed to complaints.

We can then expect that she-devil to be replaced by an even more evil low life from the feminist legal profession, which generally includes most lawyers from Ontario's largest Criminal organization,

the Children's Aid Societies of Ontario.