'Almost like I was possessed': Raquel O'Brien's rage grew from her family's dark past

By Raquel O'Brien, with Georgina Savage 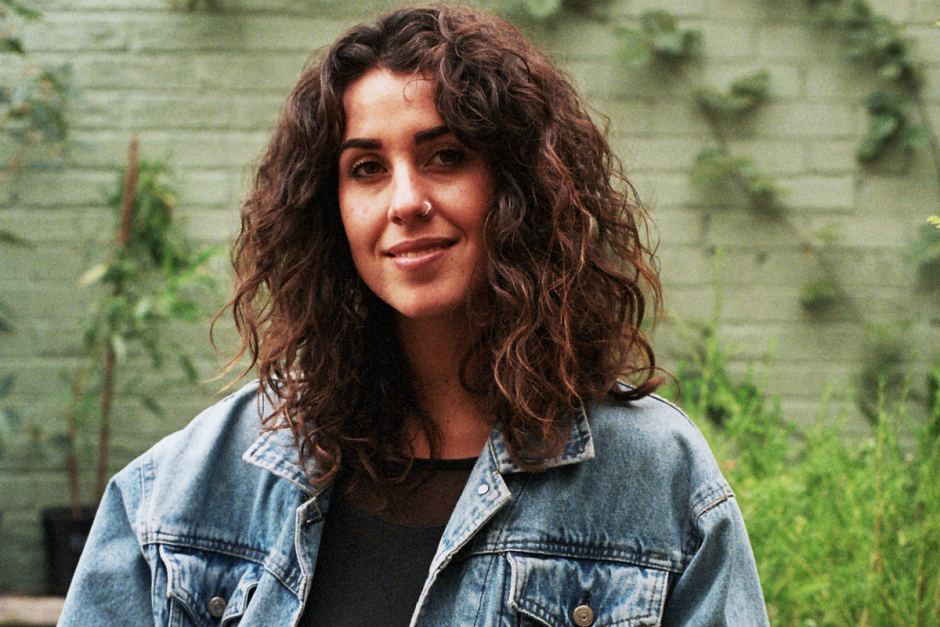 PHOTO: Raquel O'Brien says her rage blackouts were so extreme it was almost like she was possessed. (Supplied)

Raquel O'Brien says her rage blackouts were so extreme it was almost like she was possessed.

If you met me a year ago, you'd never guess that I was physically abusive to my partner. But the truth is, I was. When we were alone I'd attack him, I'd claw and punch, unleashing all the rage and pain that I otherwise held within me. He was my only outlet.

Four years into our relationship, I realised I was continuing a cycle of abuse.

I am a survivor of family sexual abuse who was raised by a child molester, and I was releasing my rage on the closest person to me.

During my episodes, unbeknownst to me at the time, I'd see my abuser in my partner's face.

I had a lot of fight in me — I'd fight him for all that had been done to me and for all the times I didn't fight back.

These rage blackouts were so extreme that it was almost like I was possessed.

When I'd "wake" I'd block out the damage I had caused by pretending it never happened.

I was desperate to break the cycle when my friend and documentary maker, Georgina Savage, posed an idea: a podcast, narrated from my perspective, to reclaim my story and release my trauma in a constructive way. It would be a form of "art therapy". I was afraid. I was used to destruction.

I spent the next 18 months interviewing each member of my family about our shared history for our podcast Silent Waves.

It was the first time we had ever spoken openly about our past, and each of our conversations were recorded on tape.

The royal commission last year has proven that institutions can be breeding grounds for sexual abuse and exploitation.

But it's time we extend the conversation to include where most sexual abuse takes place: in the private institution of family.

And for prevention we must look past the act itself and start to examine the context in which abuse occurs.

In our home, abuse went unchecked 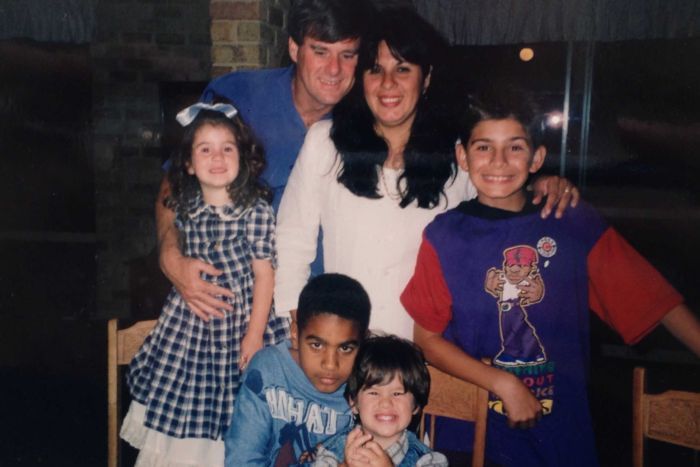 I grew up in a seemingly "perfect" family.

My parents were happily married, with four kids, a dog, a couple of cars and a swimming pool. My mother is Brazilian and was the bright light of our family gatherings. My brothers and I were all high achievers, excelling in school and sport.

The grand attraction in our home was a trophy room that boasted our success.

When my father was alive, he was the embodiment of a patriarch. He wielded all the power. In our home, abuse went unchecked; we were silenced by the perfect image we were taught to uphold.

I was 13 when my 25-year-old cousin moved from Brazil to Australia to live in our family home. He was a professional hip-hop dancer, and my first taste of Brazilian culture beyond my mother. I wanted to spend all my time with him and he seemed enamoured by my eagerness.

My cousin would incessantly stare at me and compliment me on my beauty. I enjoyed being flooded with the newfound attention.

While I didn't know it at the time, I was being groomed. His gaze crossed over to touch and he'd push the boundaries on a nightly basis. He slowly and deliberately introduced sexual behaviours I had never experienced before. He'd tell me to relax and enjoy how good it felt. While a part of me knew it was wrong, I trusted him entirely. And I loved him. He was my family.

Grooming is like a spider web, as academic Cathy Humphreys explained it to me: "What perpetrators want is for the victim to be able to say that they are a willing victim.

"So there are processes involved to suck the victim into a web, so they cease to struggle."

Grooming is a tactic used by perpetrators in which they coerce their victims into sexual acts, which is why many survivors often believe they consented to their abuse.

It is also why, as Carolyn Worth from South Eastern Centre Against Sexual Abuse told me, sexual assaults of children aren't usually violent acts.

If not family, who can you trust?

I was molested by my cousin for two years, but my father ignored clear signs.

It left me wondering who was there to trust, if not my family. And where was there for me to run when my home was no longer safe?

My cousin coerced me into believing I was at fault for his actions, and since he didn't fit the description of what I thought a rapist was, I didn't see him as one.

He was charged in 2011, served a four-year sentence and was deported back to Brazil.

When I started sharing my story through the podcast, I thought it would just be about the abuse at the hands of my cousin.

But it soon became clear that I couldn't only share parts of my story.

The abuse in my family spanned generations, and my father was at the centre of it. 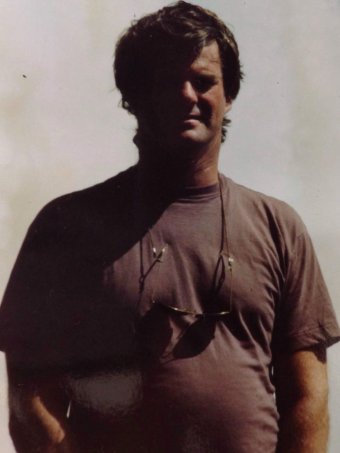 In 2013 my oldest brother Gabriel called each of us to share our family's darkest secret. It was about Dad: he had sexually abused him for years of his childhood.

When I heard the news, I ran. I didn't know where I was going, only that I needed to be as far away from home as possible. I was found hours later, crying in a park.

My father, who died in 2009, was the most important person in my life, the one that I most loved and respected. As a child, I saw him as my protector.

Now I'd discovered he was also a child molester.

I was enraged by the truth, and it triggered all the memories of my abuse by my cousin.

When Gabriel told me, it was too painful for me to process at the time. Instead, I buried it within me and never spoke to my brother about it again — until the podcast.

It was also the first time Gabriel heard about my abuse directly from me. Through the open dialogue we'd created in interviews, we were finally able to connect over our shared experience of being survivors of familial sexual abuse.

But while my brother seemed to harbour no resentment about our past, I found myself drowning in the memories I'd locked away. The revelation fuelled the rage I felt towards my father. I couldn't confront him about it and I was at a loss for how I could ever move on.

Breaking the chains of manipulation 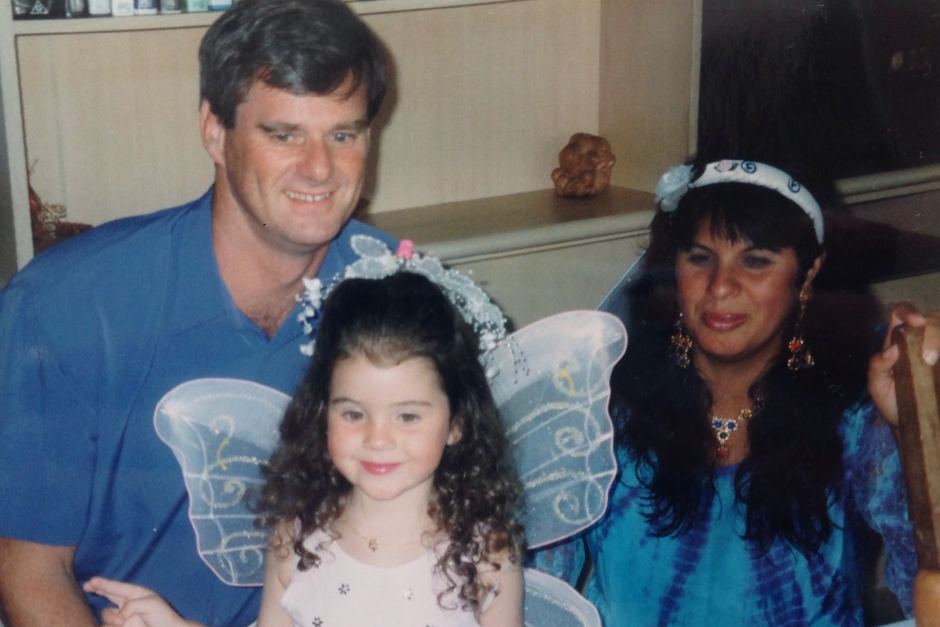 PHOTO: Raquel (front) says her father placed "poison barbs" in their heads to strip their mother of her power. (Supplied)

My father would always put my mum down behind her back. It was a tool of manipulation he used to deflect from his own behaviour. He'd imply that she was less than him. Over time, I believed him.

Ms Humphreys explained to me the role of "mother grooming" in child sex abuse. It's a tactic to isolate the mother from the abused child to ensure they will not speak out.

Our father placed "poison barbs" in our heads about our mother to strip her of her power. When she challenged his behaviour, he gaslighted her to conceal the abuse. She would retreat, believing she was crazy for ever questioning his character.

His tactic had worked on me. My relationship with my mother had been fractured for years. I'd blamed her for the abuse from my father and cousin; for not protecting her children from harm.

Interviewing her tore my heart open. I'd never heard her perspective or her pain. I'd never contemplated that she was groomed also; betrayed and used by the man she had loved for more than 20 years.

"I was actually sleeping, making love, I had children with him. How could he ever do that to me? Knowing that I trusted my son with him," she said.

Releasing the shame was easier said than done 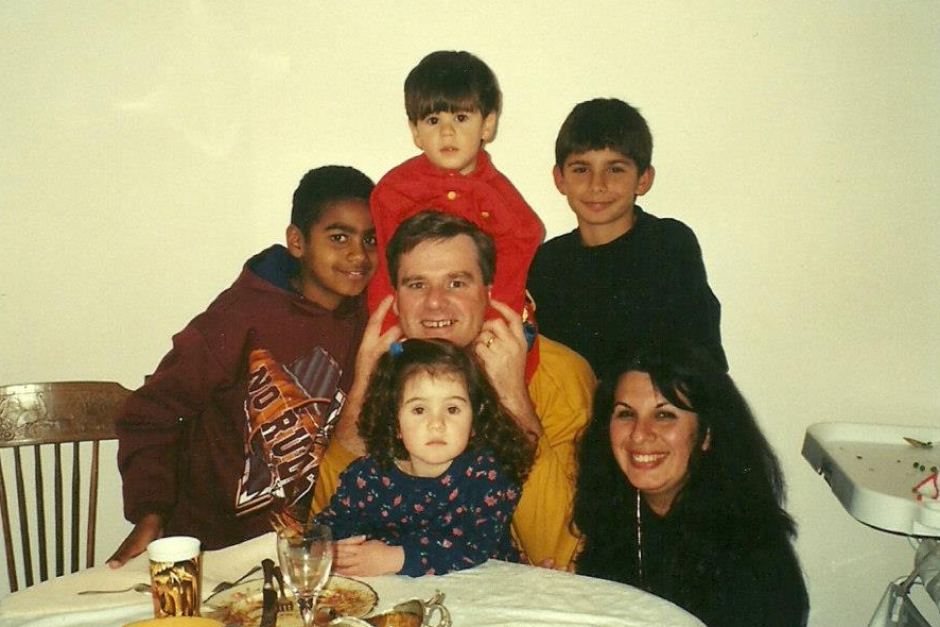 PHOTO: Raquel O'Brien (front) says she carried the shame for her father and cousin's actions for too long. (Supplied)

With my father gone, my family were free to explore what happened behind the closed doors of our family life.

Making our podcast has taught me that sharing perspectives is vital to rebuild relationships after trauma. Empathy is the key to understanding. We were able to scrutinise his behaviour and release the misplaced shame and blame that we all harboured.

By burying my story within me, I'd been carrying shame from my cousin and father's actions for too long.

To release it was a lot easier said than done.

Six months into making the podcast, I was attacking my partner more than ever. The process was having the reverse effect to what I'd hoped. Facing my past provoked my post-traumatic stress disorder. I spiralled into a pit of convulsions, flashbacks and rapid weight loss.

It felt like my past was swallowing me whole. I couldn't see a way out, so I sought professional help to guide me.

By interviewing experts, I finally understood what had happened to me; that a child can never consent, and that the abuse in my family was never my fault. But to transcend my painful past, I needed to take responsibility for continuing the cycle of abuse against my partner. I needed to provide the platform for him to speak, so we sat down with the microphone.

"I've lost so many things."

Hearing how my pain had traumatised my partner, woke me from denial. He spoke about how I'd hit him more than a hundred times and how he was a shell of himself since being with me.

For the first time I saw in my partner the extent of my destruction.

I realised that the onus was on me to change, and so I sought professional help to release my anger in constructive ways.

With no more secrets buried inside, I no longer have trauma-provoked episodes. I no longer abuse my partner.

One of the most significant victories of this process has been reconnecting with my mother.

We are closer than ever, and I finally see her for the beautiful, resilient, passionate woman that she is.

We are no longer chained by the manipulation of my father.

Looking beyond my own healing

As a society we must hold space for the stories of all survivors of sexual abuse.

Each time a survivor speaks out, our truth echoes in the ear of another.

I hope that by hearing my story, other survivors will find the strength to take the first step on their healing journey, too.

We must face the uncomfortable truth that most sexual abuse is occurring within the private institutions of our families. The more we ignore it, the more children are at risk.

It is the silencing nature of sexual abuse that imprisons us; our only escape is our voice.

Silent Waves is available on their website or wherever you listen to podcasts.

This story is a classic example of how and why women decided to destroy an innocent devoted loving father who never abused anyone.

Family Court Judges see what they want to see, and form conclusions on speculation that requires them to fabricate evidence to suit their preformed conclusions.

This will only get worse until, judges are selected for appropriate reasons rather than political correctness that means, slavery is legal.