The One Nation leader is a populist decoupled from an ignition point. Scott Morrison shouldn’t give her one

I have nothing but admiration for the people who work in the family court system. It’s a place of despair, and I don’t invoke that word lightly. Humans, many of them vulnerable, mired in the stages of grief, litigate the remnants of their most intimate relationships in that system. The environment can be not only taxing but toxic.

It’s a statement of the obvious to say opening a conversation about the family court is deeply fraught territory, and every parliamentarian knows it. Yet this week, Scott Morrison has green-lit yet another inquiry into the system and, in the process, handed a significant public platform to Pauline Hanson, who has been stoking this red-hot issue as a means of rallying her core supporters for years. 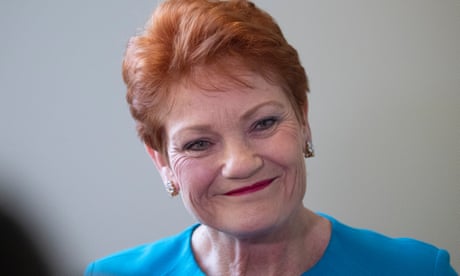 Morrison insists the looming inquiry will not “take sides”. The prime minister says this process will be about helping parents and their children, not about courting Pauline (whose vote, self-evidently, is needed in a Senate that, let’s be candid, operates with an every-child-gets-a-prize mentality)

While it’s obviously fine in-principle for parliamentarians to set up inquiries to seek new facts and perspectives, it is hard to fathom what of substance might emerge from this new process, given the Australian Law Reform Commission presented a bunch of detailed recommendations to overhaul the family court system in August. Those insights, from a body well credentialed to consider all the complexities of the issue, are sitting politely on a shelf, waiting for someone to notice them.

A recently retired former family court judge, Peter Rose, summed up the situation well when he told the Nine newspapers this week Australia’s family law system had “been the subject of more inquiries than any other aspect of the law”.

“It doesn’t need an inquiry at huge cost to tell you what the problems are – unacceptable delays due to lack of quality resources,” Rose said.

The former Australian of the year Rosie Batty, who lost her 11-year-old son, Luke, when he was murdered by his father, made a similar observation. “We know the failings,” she said this week. “We need to start investing in this court system that is broken, overwhelmed and failing. It is continuing to put families, particularly children, in danger”.

It is abundantly clear what’s required right now is careful, considered, and preferably bipartisan, action to improve the system, not another emotionally charged stunt inquiry sowing division and rancour, spearheaded by a fringe political figure with fixed feelpinions on the issue. Even if Hanson doesn’t end up as deputy chair of the inquiry, this is her baby and the world knows it.

Hanson has kicked off with inflammation, ventilating the old chestnut that women are making up domestic violence claims in custody battles. “There are people out there who are nothing but liars and who will use that in the court system,” the One Nation leader declared. “I am hearing too many cases where parents are using domestic violence to stop the other parent from seeing their children; perjury is in our system but they are not charged with perjury.”

When asked to furnish evidence to support this favoured trope of the men’s rights movement, Hanson cited personal experience, and stories from people. But as my colleague Sarah Martin noted during the week, the journalist Jess Hill, who has authored a book on domestic abuse called See What You Made Me Do – has pointed out that one of the most thorough studies on false abuse allegations from Canada found that non-custodial parents, usually fathers, made false complaints most frequently, accounting for 43% of the total, followed by neighbours and relatives at 19% and mothers at 14%.

Since winning the May election, Morrison, commendably, has worked to turn down the volume on politics and to keep the corrosive Canberra circus acts (apart from his borderline obsessive wedging of Labor) to a minimum. But this decision – to give Hanson an inquiry that Australia objectively does not need – represents a departure from that objective.

It’s also a political misjudgement that I suspect the prime minister will come to regret. Why on earth would you hand Hanson (who exists to peel off elements of the disaffected Liberal and National party base) a genuine barbecue stopper when her visibility has been low in recent times?

Hanson for some time has looked like a populist decoupled from an ignition point, and rather than let her drift into querulous obscurity you, the prime minister, choose to refresh her purpose? Like, really?

By endorsing Hanson for a prominent role in this inquiry – by facilitating her desire to be the self-styled and government sanctioned spiritual leader of this particular endeavour – Morrison is raising expectations among men’s rights activists. These folks believe as an article of faith that the family court is biased in favour of women, and they are looking for a champion to restore the natural order of things.

Now why would you raise those expectations? Why open Pandora’s box? Fiddling with the family court system is not a clear vote winner for the Coalition. For every angry and despairing dad, there’s an angry, and, in some cases, frightened and despairing mum. They all vote, at least last time I looked.

Why, if you were Morrison, would you put yourself in a position where you either have to give Hanson what she wants as a consequence of this taxpayer-funded indulgence to assist One Nation’s two-decades-long courtship of the aggrieved, or decline to give her what she wants, and in the process hand her a stick to beat you with?

Given the Liberals and Nationals tear themselves apart on social questions with only a minimum of encouragement – cue the abortion shitshow in New South Wales – has Morrison somehow missed the risk that this particular line of inquiry could also be a lightning rod inside his own partyroom? Does he think that doesn’t matter because he can keep a lid on it?

I really don’t get it. Honestly, I don’t.

It looks boneheaded and, whatever you think of Morrison and his politics, dumb as a bag of hammers isn’t the first phrase I’d normally reach for.