Judges in trouble have unlimited funding to fight disciplinary action against them. The Lori Douglas inquiry cost taxpayers $4.5 million. 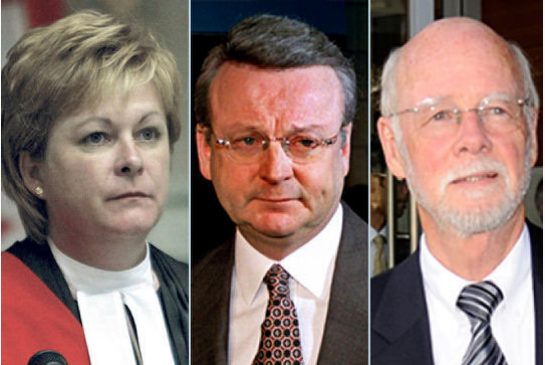 An inquiry into the conduct of Manitoba Associate Chief Justice Lori Douglas, left, was abandoned after she announced she would seek early retirement. Superior Court of Quebec Justice Robert Flahiff, centre, was sentenced to three years in jail for money laundering, prompting an inquiry . He was recommended for removal and resigned. Ontario Justice Paul Cosgrove, right, was facing removal over his misconduct during a murder trial, which the committee found to be “pervasive in both scope and duration.” He resigned two days later.

These same vile underbelly of humanity rarely, very rarely ever are investigated, and when the heat comes on, they resign.

Recently she protected CAS Criminal, Marguerite Isobel Lewis, a professional fabricator of evidence and Child Abuser for the CAS Ottawa.

Metivier was also covering up for another vile underbelly of the legal world, Justice , the Dis-Honourable Tim Minnema who is a member of the Dutch Reform Church famous for its collaboration with the Nazies.

This underbelly of the Judiciary can do the world a favour and resign or find a way of turning up his toes permanently.

Of course these same believes in Fascist Gener Superiorty, ensure their victims don't have legal aid or representation when facing criminal and or CAS fabricated malicious charges laid, to assist these same rotten judges.